Interaction and dissemination, two key words. Interactions with the economic sphere, which have been strengthened because of the growing needs of companies in modelling, quantitative analysis and simulation. Dissemination of scientific culture to the general public as well as to companies, because mathematicians have a duty to communicate about their work and to contribute to the dissemination of knowledge. This is why the Insmi has developed tools to facilitate interactions between laboratories and economic actors, and to bring together the actors involved in the dissemination of mathematics.

The interaction of mathematics with other disciplines and with the economic world has always been a source of inspiration because of the questions it raises and the new problems it brings, even contributing to the…

Various entities promote the opening of mathematics laboratories to companies. The socio-economic impact of these collaborations is significant.

Disseminating mathematical culture is one of researchers' major concerns.

The interaction of mathematics with other disciplines and with the economic world has always been a source of inspiration because of the questions it raises and the new problems it brings, even contributing to the development of new branches of mathematics.

Interdisciplinary interactions at the Insmi can take several forms: cross-support and cross-call for proposals between institutes or within the Mission for Transversal and Interdisciplinary Initiatives (MITI); collaborative programmes with other institutes; cross-assignments of researchers.

Laure Saint-Raymond (Bôcher Prize 2020) works on fluid mechanics and its applications in geophysics and hydrodynamics.

Nalini Anantharaman and Sylvia Serfaty (Poincaré Prize 2012) are interested in the interfaces of mathematics with quantum physics.

Jean-François Le Gall (Wolf Prize 2019) has developed models that have helped the mathematical understanding of quantum gravity in two dimensions.

Yvon Maday (Pioneer Prize 2019) has introduced powerful methods for numerical simulation, such as spectral methods, model reduction, domain decomposition, models and simulation in medical sciences, fluid-structure interaction and ab-initio chemistry. Several of his works have led to the launch of start-ups and are widely used in industry.

Benoît Perthame (Inria Grand Prix 2015) has developed the interface between biology and mathematics on crucial issues such as chemotaxis and cell development.

Raphaèle Herbin's work (CNRS Medal for Innovation 2017) has led to the development of a new class of algorithms for fluid mechanics, with numerous industrial applications. For example, the algorithms that are now the basis of the IRSN's CALIF3S software, used for nuclear safety calculations.

Yves Meyer (Abel Prize 2017 and Gauss Prize 2010) revolutionised the engineering sciences by developing the theory of wavelets, introduced in the context of oil research.

The work on control theory by Jean-Michel Coron (Maxwell Prize 2015) contributed to the regulation systems of the Meuse and Sambre rivers in Belgium.

Various entities promote the opening of mathematics laboratories to companies. The socio-economic impact of these collaborations is significant.

In 2015, 15% of French GNP and 9% of jobs in France are impacted by mathematics.
Study of the socio-economic impact of mathematics in France, CMI, AMIES 2015

Because mathematicians are able to manage, analyse and interpret large volumes of data, because they work on the modelling and simulation of various biological, physical or economic phenomena, they offer skills that are appreciated - and sought after - in many sectors of activity.

Mathematics laboratories also contribute to the economic vitality of the country through the start-ups that emerge from them.

On 28 June 2019, the joint laboratory for Multi-Core Multi-Organ Metabolic Imaging (I3M) was inaugurated in Poitiers between the Siemens industrial group, the Poitiers University Hospital and the XLIM and LMA laboratories, of which the CNRS is a co-tutor.

Its purpose is to structure, around the TESLA MRI 7 equipment, scientific and technological cooperation in artificial intelligence for the processing and automatic analysis of multi-modal images, to aid diagnosis and therapeutic monitoring in brain, heart and kidney pathologies.

This joint laboratory has the particularity of being dedicated to clinical and fundamental research.

At the CNRS, the Department of Relations with Industry (DRE) is responsible for implementing these interactions between industry and the research world. The DRE's mission is to promote research and organise technology transfer and interfaces between these two worlds.

At the Insmi, it is the Agency for Mathematics in Interaction with Business and Society (AMIES) which is more particularly concerned with links with businesses. Labelled as a "Laboratory of Excellence" in the spring of 2011 as part of the Grand Emprunt, this support and research unit (UAR) strives to create links between companies and mathematicians by relying in particular on a network of regional facilitators, true catalysts between companies and the academic world, and by supporting collaborations between companies and mathematical laboratories by means of a programme of exploratory first support projects (Peps).

The main actions of AMIES

In 2015, AMIES commissioned a study from the strategy consultancy CMI, which revealed the socio-economic impact of mathematics in France (Eisem). Consult the study.

Disseminating mathematical culture is one of researchers' major concerns.

To disseminate scientific culture towards the general public constitutes one of the missions of researchers and academics, the general public being either schoolboys and girls & students or plain citizens eager to keep informed and science fans. To help researchers and academics with this task, the Insmi supports the service tool AuDiMath, which brings together communication professionals working in mathematics laboratories and people active in the dissemination of mathematics.

AuDiMath facilitates networking, enabling those people to exchange skills and experiences, to share documentary resources and videos, to coordinate national projects such as the website Images des mathématiques.

Through the Fondation Blaise Pascal, the Insmi supports activities of mathematical dissemination throughout the French Territory.

Images of Mathematics (IdM) is a participatory website for the general public run by a community of mathematicians. Its vocation? To dispel preconceived ideas about contemporary mathematical research and the profession of mathematicians. No scientific publications are published on this site: the articles are educational and adapted to the level of each person, from the neophyte to high school and university graduates. The IdM's posts are open to comments from Internet users. They deal with the historical, cultural or sociological aspects of mathematical research today.

They have made mathematics their profession!

There are several careers in mathematics research in the public sector: researcher, teacher-researcher, engineer. Discover the men and women who have embraced these careers. 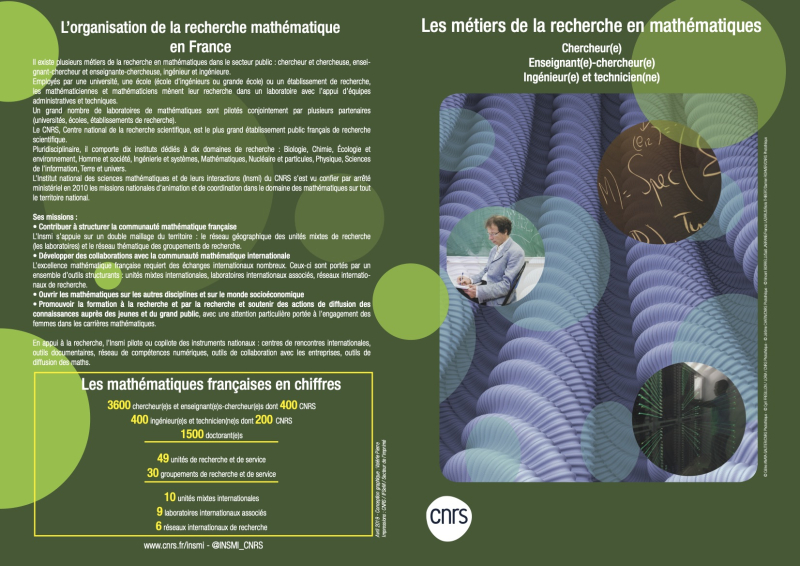 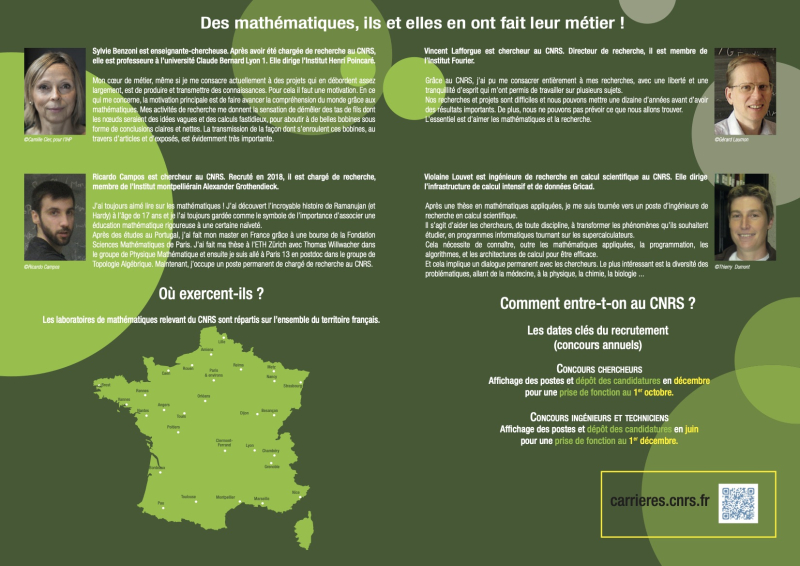